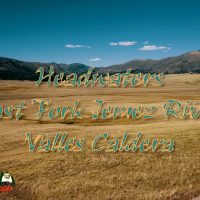 The East Fork originates in the Valles Caldera as a small meandering stream in a vast crater. On its way to its confluence with the Rio San Antonio, the river passes through the heart of the Jemez Mountains’ most popular recreation area.

The Jemez watershed offers anglers ample opportunity to catch trout. Several small- to medium-sized streams harbor rainbows, but the predominant fish are browns.NM Highway 4 follows the Jemez River throughout. The stream cuts through steep canyon walls and is replete with deep runs and pools. Surprisingly, the fishing is good even along the road. The Jemez River is formed where the Rio San Antonio is confluent with the East Fork at the prominent Battleship Rock.

The Rio San Antonio and East Fork-Jemez join to form the Jemez River at Battleship Rock. From Battleship Rock down to the town of Jemez Springs public access is shy, limited to just one mile below Battleship and then a short stretch between Soda Dam and Jemez Springs. There are approximately 4 miles of public water from Jemez Springs downstream to NM Highway 485.

Most of the Jemez ranges between 15-30 feet wide and generally 2-3 feet deep with a few deeper pools reaching five feet. Cottonwoods, willows and alders are scattered along this freestone like river forcing anglers to wade up the middle. NM Highway 4 parallels the river so access is extremely easy.